Democrats and Republicans are speaking about impeachment with dramatically different language. The winner of this frame war will succeed in shaping how Americans understand the impeachment inquiry.

The presidential impeachment battle moves to a new stage on Wednesday, when the House will conduct the first public, televised testimony.

The nation is divided: Although a majority of Americans believe that Trump should cooperate with the impeachment inquiry, the public is not yet sure if Trump is guilty of impeachable offenses.

The impeachment battle will occur in Congress. But it will also play out on the national stage as the two sides compete to frame how the public thinks about the legitimacy of the inquiry.

Frames are ways of thinking about a particular thing, person or event. Linguists like George Lakoff explain that “sticky” frames, when repeated enough, will literally stick in our heads, rewiring the circuits in our brains and providing shortcuts to understanding reality.

The winner of this frame war will succeed in shaping how Americans understand the impeachment inquiry and will provide the standards for judging whether or not Trump has committed impeachable offenses.

Democrats, led by Speaker Nancy Pelosi, are betting that public opinion will move toward impeachment and removal once more information is made public. To try to shape public opinion they are relying on a law-and-order frame that tells Americans that the impeachment inquiry is legitimate and legally justified.

Democrats are positioning themselves as the only ones willing to uphold the rule of law and the Constitution.

Republicans, led by President Trump, are counting on their power to frame reality to prevent the public from moving toward impeachment.

The GOP is relying on a conspiracy frame that tells Americans that the impeachment inquiry is illegitimate and part of a plot to destroy America. Republicans are positioning themselves as the only ones who are not involved in the plot against Trump and America.

As a scholar of American democracy and communication who has a book coming out next year about Trump’s 2016 campaign and demagoguery, I’ve been paying close attention to the frame wars.

Historically, Republicans have deployed a law-and-order frame to shape the public’s understanding of their party and policies.

In his 1964 Republican Party Convention acceptance address, Barry Goldwater committed the Republicans to policies that would preserve “a government limited by laws of nature and of nature’s God … so that liberty lacking order will not become the license of the mob and of the jungle.”

Goldwater lost the 1964 election, but his law-and-order frame has dominated the party ever since.

Democrats are now repurposing that frame to shape public understanding: Trump’s actions not only violated his oath to protect the Constitution, Democrats argue, but endanger the rule of law itself.

House Speaker Nancy Pelosi established the law and order frame from the beginning of the impeachment inquiry.

Pelosi’s Sept. 24, 2019 announcement launching the official impeachment inquiry referenced Constitution Day. She noted that “sadly on that day” President Trump prevented Congress from receiving information about “a whistleblower complaint,” which Pelosi said is a “violation of law.”

She accused Trump of “calling upon a foreign power to intervene in his election,” which was a clear “breach of his constitutional responsibilities.”

Pelosi next established her credibility to know the “law and order” on this issue by explaining her 25-year history on the Intelligence Committee, her work to establish the Office of the Director of National Intelligence, and her work to write the whistleblower laws themselves.

“I can say with authority,” Pelosi declared, “that the Trump administration’s actions undermine both the national security and our intelligence and our protections of whistleblowers.”

“No one is above the law,” Pelosi said.

Pelosi’s language has been used throughout this process by fellow Democrats.

The Democrats’ “law and order” frame is useful because it is expansive. New information about Trump’s violations of his oath of office can be easily incorporated within the frame.

For example, if Trump continues to obstruct the inquiry, then the law-and-order frame lends itself to impeaching Trump for obstructing the investigation, a clear violation of law and order.

It’s also useful because it tells the story of the impeachment inquiry as essentially conservative – Democrats want to preserve and protect the country’s long-cherished Constitution and the rule of law.

Trump is leading the Republicans in attempting to counter the Democratic Party framing. He uses a “conspiracy” frame.

In 1964, historian Richard Hofstadter wrote about the “paranoid style” in American politics. Paranoid rhetoric throughout American history, Hofstadter wrote, told an apocalyptic story of a network of agents determined to infiltrate and undermine the nation.

On Nov. 4, 2019, Trump invoked this frame when he accused Democrats of having a “crazed thirst for power.” He told his Lexington, Kentucky, rally that “the Democrats are trying to tear our country apart.” He called the “deranged, hyper-partisan” impeachment inquiry a plot to “nullify the ballots of tens of millions of Americans.”

Trump’s conspiracy frame relies upon a rhetorical strategy called tu quoque, Latin for “you too.” It invokes hypocrisy, effectively saying “they do it too.”

Trump and the Republicans have used tu quoque to try to discredit Democrats, individual witnesses and the entire investigation.

“This is a hoax, the greatest hoax,” Trump claims repeatedly – framing the Constitutional investigation in the language of conspiracy.

Like conspiracy, an appeal to hypocrisy centers on the question of trust. It argues that we cannot trust the opposition because their motives or actions are impure. It’s a strategy designed to deny legitimacy by attacking the credibility of the opposition.

As the impeachment investigation moves into its next stage, expect Trump’s team to continue to attack the essence of the Democrats’ frame. 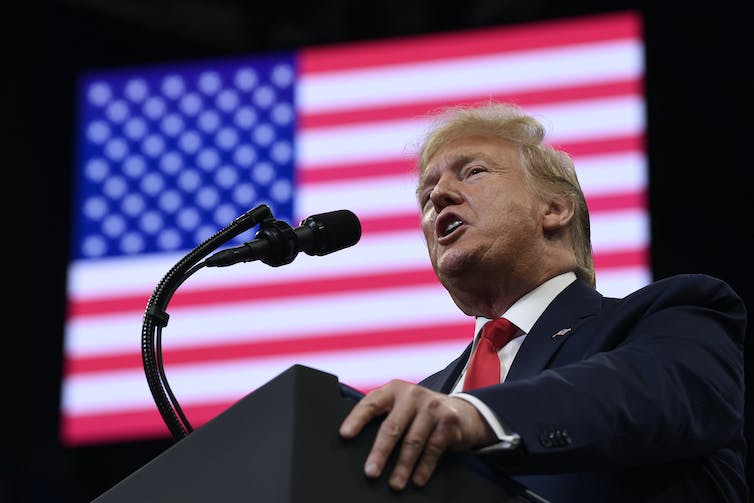 President Trump told a Kentucky rally in early November that the Democrats had a ‘crazed thirst for power.’ AP/Susan Walsh

Attacking the transparency of the process, calling it a “Soviet style” investigation, and using personal attacks against Democratic leaders can all be understood as strategies within this frame.

Likewise, because responding to charges of conspiracy or tu quoque is a losing proposition, expect Democrats to ignore Trump’s conspiracy framing, continue to assert that the investigation is about the rule of law, and rely upon arguments from authority – the authority of the process, the Constitution and precedent – to make their case.

And expect them to make arguments about how history will judge this moment and the choices that are made by Congress about Trump’s conduct.

In their more impassioned moments, expect Democrats to resort to apocalyptic rhetoric as well. After they have provided the nation with an accumulation of evidence they say proves Trump’s guilt, expect them to argue that the very viability of the Constitution and the rule of law are on the line.

Will Trump be impeached and removed from office? If no one persuades anyone in Congress to adopt their frame and the parties vote along party lines, then Trump will be impeached by the House of Representatives, but not removed by the Senate.

At that point, Americans will be asked to understand the impeachment process as both a defense of law and order and a conspiracy to remove the president. Voters in 2020 will have to decide how to make sense of that contradiction.